A bit of SARAYA History: the 2005 Norovirus Outbreak in Japan 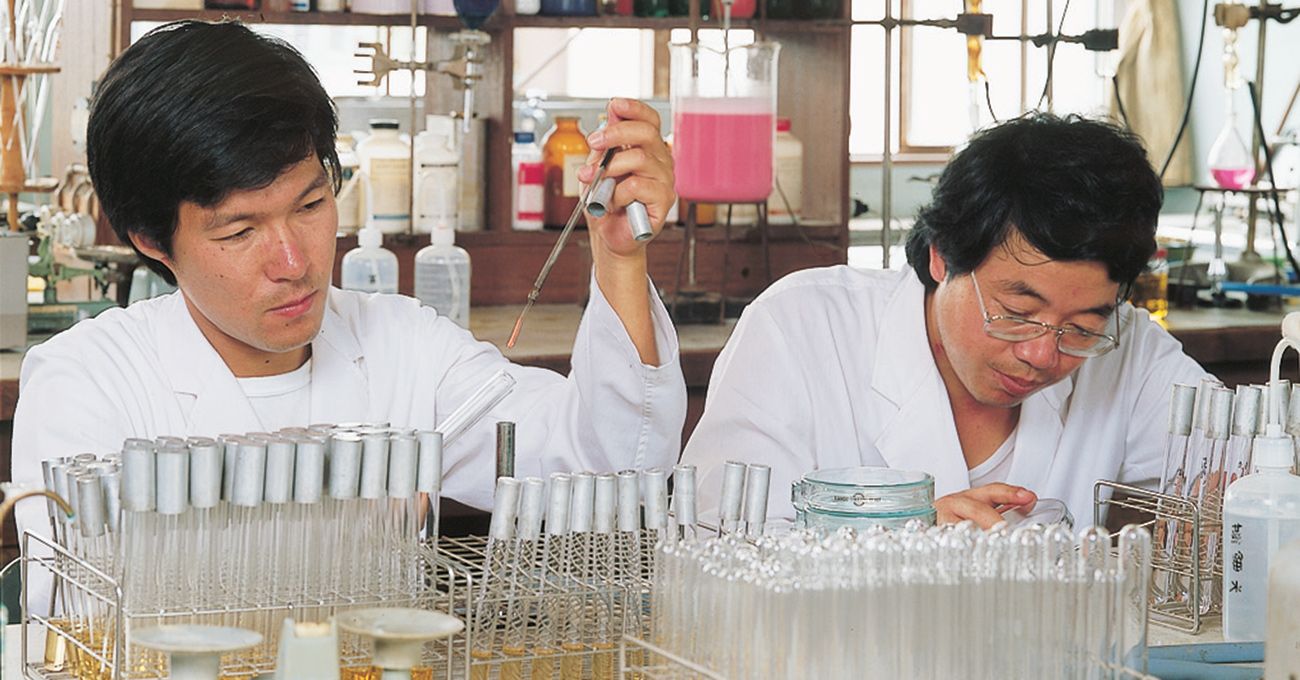 A bit of history of SARAYA, how we contributed to improving norovirus prevention in Japan, and “Dr. Handwashing” was born.

Dr. Taro Furuta (above photo, right; photo was taken in the ’80s), former head of Saraya Biochemical Laboratory and current advisor, was one of the major developers of many of Saraya’s hand hygiene products for the past 50 years, making him one of the leading figures of hand hygiene in Japan. This is an extract of our conversations with him, talking about the norovirus outbreak during 2005-2007, and how that led to him being known as Dr. Handwashing.

Norovirus, and its 2005 outbreak in Japan

Norovirus, a very contagious virus that causes vomiting and diarrhea, is a common cause of gastroenteritis worldwide. Pediatricians often described it as “winter vomiting disease”, but it was not until an outbreak at an elementary school in Norwalk, Ohio, in 1968 when it was tentatively linked to a virus named the “Norwalk Virus”. Scientists began more detailed studies in the 1990s and eventually determined Norwalk was one of the groups of related human viruses with similar symptoms that are now known as “noroviruses”.

These fast-spreading viruses can hold in the environment: even just a handful of them can resist most active ingredients in cleaning products, for weeks or longer, to then spread by touching that contaminated surface and putting your unwashed hands in your mouth. It can also spread through direct contact with an infected person or consuming contaminated food or water.

The virus has been too difficult to culture to this day; therefore there are no antiviral drugs, nor vaccines available yet. The best countermeasures are hand washing and disinfection, making proper hand hygiene extremely important.

When a norovirus epidemic hit stronger than other seasons around 2005, making the news with epidemics in schools and senior care facilities, Dr. Furuta and his team immediately conducted product efficacy experiments of our products as a solution. Noroviruses belong to the Caliciviridae family so they used feline calicivirus, an alternative to norovirus, which caused diseases in cats. Saraya was the first company to conduct experiments on the efficacy of its hand hygiene products using this virus, mainly thanks to our laboratory equipped with a microbiology research facility, which is rare for a company. In order to see if our alcohol formulations would work, they tested the effect of adding other ingredients, mainly ethanol, to alcohol to improve its efficiency changing chemical ingredients to check if disinfection would occur under a minute, like 15 seconds or 30 seconds.

Together with previous research findings, Dr. Furuta started to create and organize information about Norovirus countermeasures. He knew the best countermeasure was hand hygiene, and as a specialist in said subject, he already had researched numerous theses published all over the world, always collecting information from as many sources as possible. He made a guideline based on the evidence categories and paid extra attention to make sure that this guideline would not deviate too far from the existing guidelines in other countries, ensuring a minimum quality equal to any international guideline.

Around that time, he was invited to some TV talk shows on NHK, the Japanese national television network, to talk about proper handwashing, vital for the prevention of infectious diseases like norovirus. While appearing on several shows between 2005 and 2007, he was always introduced as Dr. Handwashing.

“Dr. Handwashing is a name that I would have never come up with by myself, but everybody started using it as my nickname,” he said.

Over the years working in SARAYA, he has developed many hand hygiene products like medicated hand soaps and hand sanitizers while conducting countless experiments. He has even written some books about norovirus and its countermeasures, together with other notable scientists, also giving lecture tours all over Japan.

And that is how he helped improve infection prevention against norovirus and why people started to call him Dr. Handwashing.

Improving the sanitation, the environment, and health of the world.